For many, monopoly board game are a means of whiling away one's leisure time. However, unlike computer games, board games like Monopoly are interactive and have the advantage of helping players develop social and interpersonal skills. Played in a group, it provides opportunity for players to interact as well as observe how others think and analyse.

Playing as a family, monopoly game encourage family members to spend time with each other and thus build stronger family bonds and friendship.

Parents can also use monopoly board game as a tool for their child development. This game helps a child to improve his mathematical skill as well as teaching him the value of money. 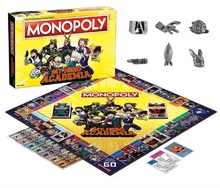 History of Monopoly Board Game

In 1934, at the height of the Great Depression, Charles B. Darrow of Germantown, Pennsylvannia, United States, brought a game he designed on his oilcloth a year before to the executives at Parker Brothers. The game was rejected due to 52 design errors.

Unemployed at the time, like many of his fellow Americans, Darrow with the help of a friend who was a printer, produced the game on his own. He sold 5,000 sets to a Philadelphia department store. People loved it. And the demand grew.

But soon Darrow found it hard to meet the orders and decided to go back to Parker Brothers, who this time bought the copyright to the game.

Today, Monopoly is the best selling board game in the world. It is sold in 80 countries, produced in 26 languages and, throughout its history, is estimated to be played by 480 million people.

Monopoly is so much a part of today's culture that many of its graphic elements has been trademarked. It has also evolved to include special editions like the Disney edition, Monopoly Toy Story Beyond and the Star Wars edition.

The 70-year-old game has also spawned worldwide tournaments (the World Monopoly Game Championship) that first began in 1973, an event, which at one time only chess could boast of.

Varieties of Monopoly Board Games

There are now many varieties of the Monopoly Board Games available in the market. The following are some of those that we came across, which might be of interest to different individuals who would love to keep them as collectibles. We will add to the list as we come across other varieties.